Posted on 29th August 2019 at 11:42
There are times in our lives when the stress is just too much. When life feels like it is going so fast and it appears impossible to know what to do; to know which way is up.
The last four months of my life have been like that . . .
At home we have the builders in. A job that should have taken 12 weeks is now at week 20. We had no downstairs water for 10 weeks; we’ve been camping in our own home; the mess is awful. People haven’t done what they said they would do or done things to the standard we want them to. The peace and tranquillity of our normal home life just hasn’t been there. Add into the mix that in the same space of time we have been burgled twice and the car has been bumped twice and you might start to get an idea of how life has been since April.
Oh, and one other thing. Our daughter got married last week. A truly joyous occasion only slightly marred by the fact that the afternoon before the wedding I spent 3 hours in A&E because I had fallen 2 inches (yes, 2 inches!) and hurt my ankle. Just a bad sprain necessitating crutches and a boot accessorising my wedding outfit rather than my fabulous three-inch wedding heels.
All together now – aahhh!
To say that life has not been going as I planned is an understatement. I’ve felt tense, angry and anxious and my usually good sleep has gone. There have days when for an hour I have been angrier than I’ve ever been in my life because of a building issue, followed by an hour when I have been so excited and full of joy because of a wedding conversation. Many, many times I have said to friends and family, “I’m losing the plot. I don’t know what to do.” And that made me feel helpless.
You can only imagine how excited I was a few weeks ago to find, in the middle of building chaos, a big box with “Plot Box” written across it. Because I’m curious I had a look inside. It was full of papers and drawings and instructions that didn’t mean a thing to me. In fact, to be honest, it made my tummy flip a bit and I closed it, disappointed that it appeared to offer me more questions than answers. But this was the builders plot box. It was there to help them plot their way through our extension and it made me think, “Where was my plot box? What guidance did I need to help me feel less helpless and more in control of life again?”.
So, I sat down that weekend and designed my own plot box. All the things that usually provide me with stability and a sense of being grounded were gone and somehow, I needed to find them.
Into my plot box I put:
• A daily walk to get some fresh air and exercise
• A return to soothing rhythmic breathing practice to help slow my mind and calm my body
• Asking for more help from friends and family in the form of cooking us an occasional tea (13 weeks of only having a microwave is getting boring!) and doing more of our washing
• Cutting down on my workload and saying no to some requests
• Awareness of my conversation – it is so easy to only talk about delays and dust. Instead each evening I tried to spot at least three things that had gone right with the build and instead of saying, “Why haven’t they …….!”, I’ve tried to say, “It’s just not finished yet.”
• Yoga – sometimes going twice a week instead of once. Yoga gives my mind and body space no matter how crowded and busy my world is
• Going to bed earlier and using sleep casts to help me when I couldn’t sleep
Did the plot box suddenly get the build finished? Absolutely not! What it did was just give me the occasional sense of being back in control; of accepting that there are somethings that I can’t do anything about and that it is OK to say when we don’t feel great and that we need help. When I reached out, I got the support I needed both from myself and others.
We should all have a Plot Box. What would you put in yours? 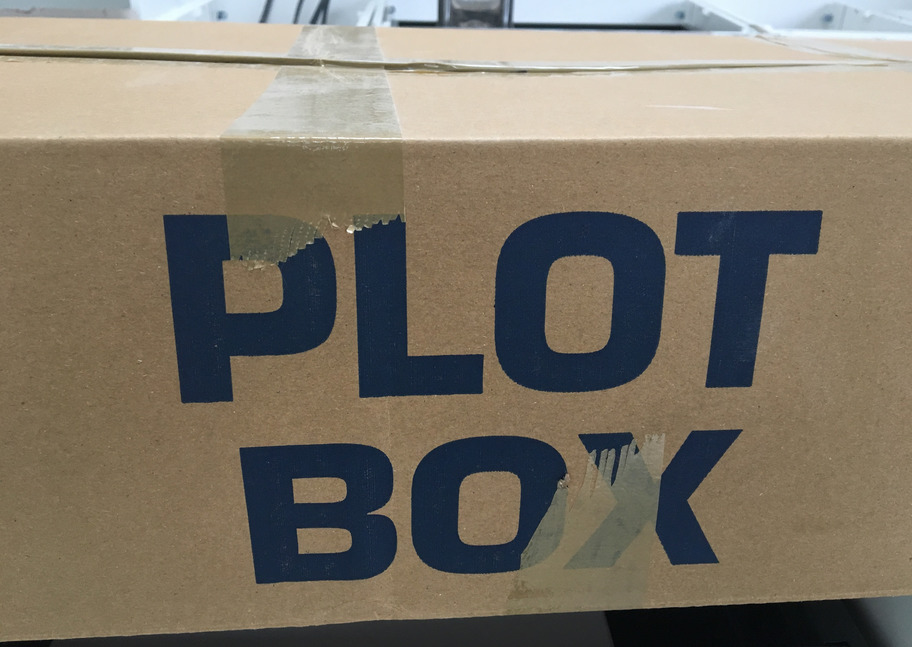